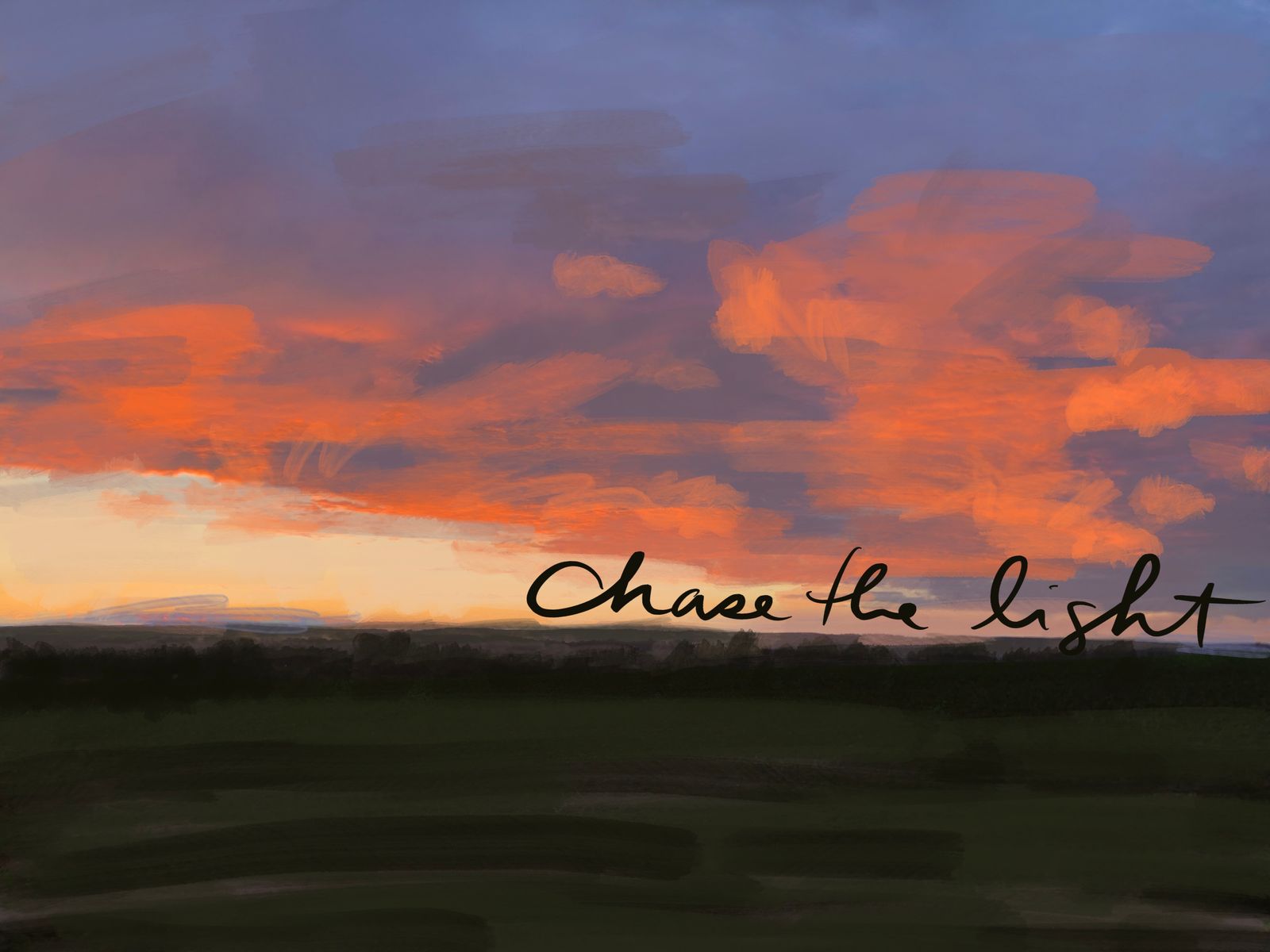 Our house in Georgia is closely guarded by 50 acres of young woods. The trees stand like sentinels, shading our little street from the rest of the bustling outside world. The forest is a blanket that tucks us in and holds us fast. We love our little home on this earth. But we don't see a lot of sky here, just patches between tree cover.

So when we go to Pennsylvania to visit my parents, with it's long, blue ridges of Appalachian mountains stretching out like arms open wide, its old farms tucked in the valleys between, most every night at sunset, we chase the light a mile up the road so we can see the sun setting behind mountains and long, friendly rows of freshly planted fields.

"Mama, are we going to chase the light tonight?" Little Girl asked, right about the time the sun was beginning to set.

"Not tonight. I think it's bed tonight, you need sleep. It's been stormy all evening anyway."

The children were tucked in, we were singing lullabies when strange golden light began to pour in all the cracks of the curtains. I adjusted them, tugging to the right, to the left, then the right again. No matter how I moved them, more light stubbornly poured in.

"Mom, what is that weird light? How am I supposed to sleep when it's so bright?" the philosopher child asked.

Oma came running pell-mell down the stairs then, shouting "Katie-Katie-Katie, go outside. Get the kids and go outside," her arms flailing over her head, breathless from her sprint.

"Is there a fire? Is everything okay? Shouldn't we get Dad?"

"Rainbow. Double Rainbow. Outside right now," she shot back over her shoulder as she rushed out the door. "Get the kids and go outside. NOW."

No sooner did the door slam behind her than the kids were roused and in hot pursuit.

We ran up the hill to the field so we could see, really see. The rainbows in the eastern sky arced impossibly high. Basking in the same strange golden light that burst through the bedroom curtains, we craned our necks and looked straight up to fully take them in. Each color of the rainbow's spectrum were distinct.

We watched for several long moments until a neighbor, phone in hand, shouted, "Maybe you should follow it, find the pot of gold!"

Little Girl turned around then and saw the sun was setting the western sky entirely ablaze, bright orange and red against the dark raw steel of storm clouds scudding toward the South. Pinks and the soft orange of twilight behind the mountain made the ridgeline a dark blue silhouette of itself.

"We have to chase the sunset now, right, Mama?" Little Girl asked as she set off running. "Keep up, Mama."

So we chased the light, all of us. Up another hill, and another, the topography leading us upward, just enough so we could see for miles. The kids, now as breathless as Oma, made up stories, imagined a thousand things they wanted to write down or draw. They all wished they could keep this one moment, this one feeling, forever, alive and sacred. We lingered, beholding.

"Why isn't everyone out here with us? This is incredible!" said the philosopher child as we walked by a darkened farm house, the front window illuminated briefly at random intervals by the flashing light of a television.

"Their loss, really," I said. "I guess you have to cultivate an appetite for what's real."

The sun sunk below the horizon. We made our way back, the darkness began to deepen, the storm clouds rolled over us, a siren wailed from the highway in the distance. We were still all aglow from the light, like Moses after he came down the mountain.

In bed again. Lullabies, again. This time, in proper darkness, snug and cozy.

"I'm never going to forget that light," the big one said.

My nephew died too young on a June night two years ago. He loved lights, when our family talks about Cullen, we talk about light. Chasing light, that night, I thought of him, my mom did too. We carried him with us, up the hill to see the light spilling out behind the clouds.

My oldest son is fond, right now, of quoting song lyrics from the artist Sleeping At Last. He's contemplating them deeply. The other day in the kitchen, he looked at me and said, "Mom, here's a line that I think explains what I think about God, 'maybe the light is the seed and the darkness, the dirt.' It's not that bad stuff happens because it's supposed to, but that we need the darkness to really see the light."

He may be right. What made the light worth chasing was the clearing storm, how the light was broken and scattered because of the surrounding darkness. We see more of the light's dimensions, the invisible structure of it, when instead of going straight, many obstacles in its path break it into a million different, shimmering courses.

So with us too.

"By his wounds, we are healed" never made much sense to me until I encountered real suffering. Brokenness is the cornerstone of my faith; God is relentlessly redemptive. I believe this even though I don't understand it. This is the mystery, the paradox: light is made more beautiful when it is broken by darkness.

There is beauty in our brokenness.

Or, there can be. If we have senses sharp enough to notice it and the will to chase after it.