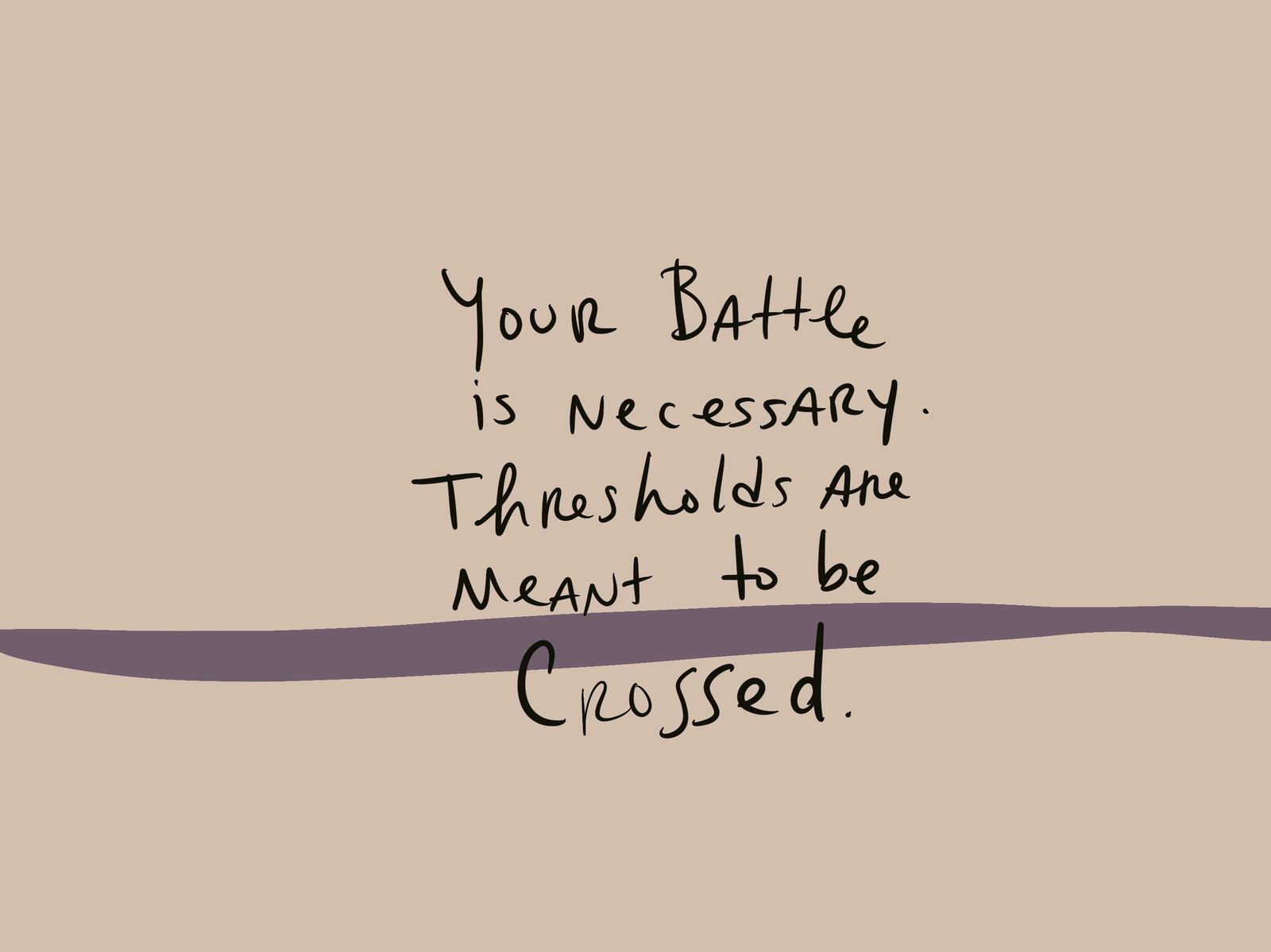 I've been thinking about thresholds. About crossing them and pushing them. About what, exactly, we're supposed to do with them.

The word can mean both a doorway to what's next and an upward limit that if you push too hard will collapse an entire system. You carry a new bride over a threshold; you have a high pain threshold (or low, if you're like me).

In the early stages of Joseph Campbell's hero's journey, when a hero is about to step out into a wider world of adventure, a threshold guardian will fight her and later become her guide and friend leading her on the next step of the journey. The contest of strength proves the hero's resolve.

Winning or losing the battle doesn't matter so much, as long as you meet the threshold guardian.

I want to love them, I want to want to learn from them. But, I usually just run away from them, which makes the battles exhausting. I battle without purpose.

Watching toddlers learn how to walk, they fall down constantly for weeks. Their threshold guardian is gravity. Each time they right themselves and try again, their brain is calibrating and recalibrating: yes, this is where center is, this is what upright feels like, this is balance. Over months, it becomes seamless, their movements become fluid. Instinctively, they befriend their threshold guardian, Gravity, because they know that is how they build strength and find center and continue their adventure.

I'm trying to name and befriend my threshold guardians. I'm trying to sit with them a little after battle instead of just thrashing and slapping at them and then running away to hide, the way an angry, overtired child treats its patient mother.

If I had to name them all right now, they would be:

If I grapple with them well and then make friends with them, I hope I can ask them the right questions, I think they'll show me answers, or maybe, lead me into better questions. What I can be really certain of? Where are my anchorholds? What does real security looks like? How can I live with the utmost significance?

As Rainer Maria Rilke put it in Letters to a Young Poet, "Live the questions now." He continues: "Perhaps you will then gradually, without noticing it, live along some distant day into the answer."

I think this must be the way it is with our threshold guardians, after we've battled well with them and lived into the good questions for a while: maybe we won't find answers as clear as "purty good, 'n you?" but we will have an ease and familiarity with them. We'll know how to battle and how to befriend, we'll be stronger because of it. Surely that will lead us on to the next step in our adventure, onward to wisdom.