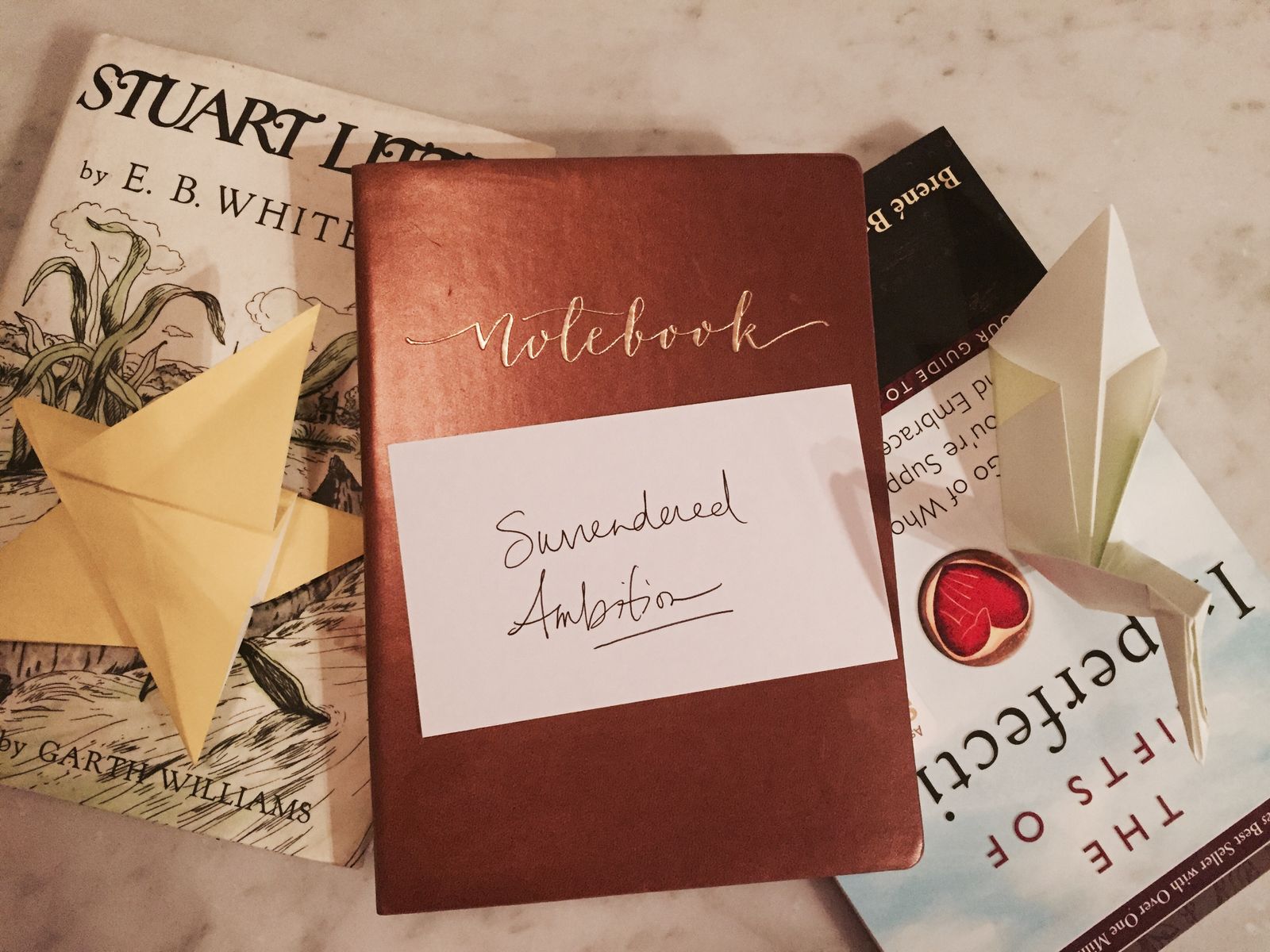 My Words for 2017: Surrendered Ambition

A few years ago, I'm not sure exactly when or how, a family tradition evolved where we pick words at the outset of each New Year, a few words that capture our intentions and goals for the coming 365 days and share them with the family on New Year's Eve. Just before midnight, we all circle up, all 20-25 of us depending on who's in town, and review our words from the previous year. Inevitably, most of us forget what we said last year. Caleb acts as scribe. He has years' worth of lists on the notes app in his phone. One day, in a decade or so, we may be able to plot the course of our growing extended family through these word constellations. We measure ourselves against our forgotten words. Usually, we're happily surprised at our gains toward our neglected intentions. Then we go around the room declaring our new words for the next year.

I thought long and deep about my word for 2017, like I do about most things. I pestered everyone about it, "What's your word for next year? What do you think about mine? Does that make sense?"

Polling is fine, it can be occasionally helpful, but it's also a stalling tactic.

Like when my boys ask for water before they go to sleep, with ice, no, that's too much ice, now that's too little. Did you get the water from this particular faucet at the other end of the house, my very favorite faucet? This isn't the right kind of cup. Can't you do anything right, woman?

Declaring a word or an intention for the year, I treat it a little bit like a vow, at least for the month of January. I take it seriously. I feel pressure, maybe a good kind, but probably a bad kind. I very much want to get it just right. Perfect even.

Perfectionism is also a stalling tactic. The kind that can hamstring a girl and her healthy ambitions.

I looked up "hamstringing a person," to get a grip on if it's what I meant. It was used, in the gruesome historical way back, as torture. Cutting the hamstring of a person or animal cripples them so they are completely immobilized. It's a severe laceration, unbelievably painful, it usually, wikipedia glumly assures me, results in death.

Since I was 17, I've wanted to be a writer. I pictured my name on the spines of books. I decided it'd be small, not one of those where the author's name is bigger than the title. I wanted the title to be bigger than my name. That felt important.

I majored in English in college, after switching majors from the very sensible, very bloody major of nursing. I realized people are squishy and I didn't really want to spend a lifetime placing catheters. So I changed majors and payed attention to my deep yearnings, the thing that was gnawing at me. I wanted to be the next C. S. Lewis or Donald Miller, but with girl parts. And funnier.

Then I started writing short essays. I realized that it's hard, this thing I want to do. It feels lonely and naked. It's fun, sometimes, enlivening. It can feel endless. And purposeless.

You have to be a true believer to write anything. To create anything.

For a lot of reasons--see above, polling, perfectionism--I found myself hamstrung, immobilized, in pain, in regards to my literary ambitions.

Writing is hard work with very little guaranteed pay off. It's difficult and ungainly to make a career out of it, a little like acting or making any art that way, I guess.

Once, during a soccer game when I was 12, I got a cramp in my right hamstring. Aimee Kugel's dad, John, was our coach. He made grunting noises like Tim Allen from the show Home Improvement, it was popular then. I think he thought it was adorable. I collapsed on the field, gripping the back of my right leg, convinced I was dying, I don't know that I'd ever felt pain like that in my life before. The ref called a time out and Mr. Kugel came running over. "Katie, I have to stretch and rub your leg, you have a charley horse in your hamstring. I know this is uncomfortable, but lay down. It won't last long."

So there I was, mortified, on my back, in the middle of the soccer field, my right leg propped up on Aimee's Dad's shoulder, while he kneaded away mercilessly at the back of my thigh as my teammates, the other team, parents, siblings, and friends, all looked on. I think it might also have just started to rain right then. My hair curls awfully in the rain.

It was a moment of pure preteen horror.

A half minute later, I was up on my feet and ready to play defense. There was light, disinterested applause from the sidelines. I don't think I thanked Mr. Kugel, I should have. I probably didn't make eye contact with him for a week or so afterward.

The point here, for me, anyway, is that a little pain, a little (humiliating) remedy and we kept on moving. Kept on playing the game.

I wasn't a talented soccer player or even a very good athlete, but I was good at showing up reliably and doing the work set before me. Slow and steady.

Once on the way into my doctor's office, a hunched over old woman was making her way in behind me. She huffed while she gripped the handrails tightly, "I'm sorry I'm so slow."

I stood on the pressure pad to keep the automatic doors open for her, and I said, "Slow is steady and steady is fast."

"Yeah, I suppose so," she said, a little more brightly.

I never really appreciated until now just how brave she was.

I selected the words "surrendered ambition" this year based on a sermon I heard about how our best, most meaningful ambitions are the ones we surrender to God and those around us.

I almost chose "book" too, as in, write one just to see if I can, but that made me want to dance and throw up at the same time (a sure sign I'm heading in the right direction).

At some points, it feels like I'm throwing it aside, like a cigarette butt out of the window of a speeding car. "Here, God, just take this confounding gift, I don't want it. It's too hard." At others, it feels little like I'm a birthmother relinquishing a precious newborn child because, well, so many tender and complicated reasons. Someone else can surely do this better.

Letting go is a mystical holy thing: not thy will, but yours be done. Jesus in the garden, hands up in surrender. Or worship. Or both. It's a painful thing. A humiliating thing.

This is what I was missing in my 20s. To write is to let go. To parent is to let go. To follow Christ is to let go. To let go of my ambitions and intentions in a very particular way. To surrender them, let them grow, give them room and space to breathe. Give them away. Let them change and evolve over time, held always in harmonious tension with those around me, with Him who dwells within me.

We must release our gifts into the great, wide world. Let them romp around, be a little unruly. They may change things, they may not; but we will be transformed in the process. And that's the point of surrender. It makes room for God to work.

2017 is going to be an interesting year.