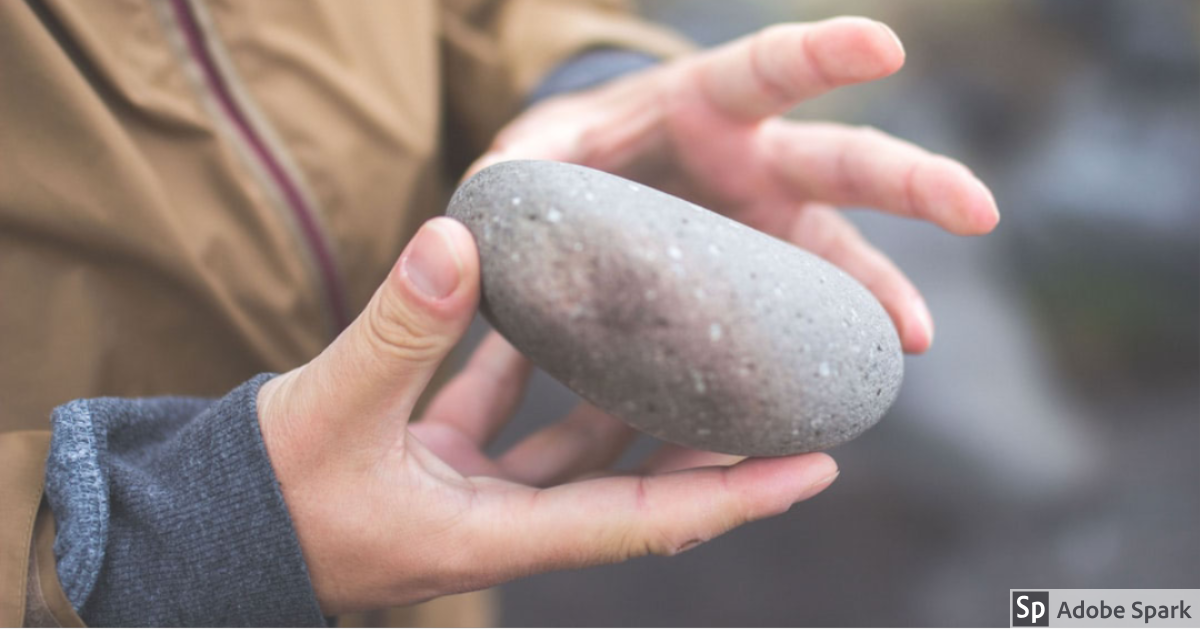 I recently read The Book of Forgiving by Archbishop Desmond Tutu and his daughter Mpho. At the conclusion of the first chapter, after they've told you all about what forgiveness is and why it's good, they invite you to hold a palm-sized stone in your non-dominant hand for 6 hours, as an allegory for holding onto bitterness and unforgiveness. See what happens and then journal about it.

I decided to do it one random Monday morning. Out of curiosity more than anything, I didn't know what I would learn, but I figured it would go somewhere. I selected a large smooth river rock we had left over from a rock-painting craft. The kids eyed me suspiciously, "uh, Mommy, what are you doing?"

So I explained: "well, I'm reading this book about forgiveness and they asked me to hold this large rock for a whole 6 hours to see how I felt. It's supposed to represent holding on to all the bad things we need to forgive—bitterness, hurt, anger. It's, um, an experiment."

They punctuated every lesson with the comment or some variation, "I can't believe you're still holding on to that."

The day unfolded as usual, reading, lessons, questions, breakfast, snacks, lunch. At first, the rock was a novelty. That quickly wore off, I found myself starting a lot of sentences with the words, "I can't..."

"I can't open that granola bar for you, sweetie, I only have one hand."

"I can't hold this book open and stand up, I only have one hand."

"I can't send a text, this is taking forever. I only have one hand."

"I can't rub your back, sweetheart, I only have one hand."

To do anything that required two hands, I had to grip things between my left forearm and my torso. I clenched my shoulder muscles, trying to find some kind of leverage. It was never quite enough. Everything was difficult. By lunchtime, I was irritable, my shoulder ached, my arm had fatigued out long ago. But still, I clutched that rock. By hour 5, I half-shouted at the littlest child, "Don't you see I have a handicap," I flailed my arm for dramatic effect, "I can't help you guys like I normally would. You need to do it yourself."

We were in the kitchen, the refrigerator door was ajar, the kids were all gathered around asking what's for lunch.

"Maybe that's the point, Mommy," said Connor. "Maybe the point is you have to let go."

All of us looked at each other for a moment, digesting that bit, collectively we understood why we need to "forgive our debts as we forgive our debtors" on a very basic, very clear, very human level. You don't function at full capacity, you don't realize your full potential if you're busy clutching a heavy rock in one of your hands. You get sort of mean and surly.

The timer for the rock experiment I had set on my phone when I got up that morning went off then. We all cheered. I did what any good homeschool mom would do: I turned letting it go into a physics lesson. I grabbed a feather from the craft cabinet in my right hand. I went to a second story window, held up the rock and feather and asked them, "which one will hit the ground first?" Everyone said the rock, but of course, they didn't know about the constant of gravity. After making sure everyone had a good view, I opened a window, stuck both hands out, counted down, and then belted "Let it Go" at the top of my lungs as the feather and rock fell to the earth at the exact same velocity. They were astounded. We proceeded to throw several other household items out of the window in the name of science and then got lunch.

Here's what I learned: forgiveness, at it's core, is letting go. It's releasing a debt that is owed to you. And whether the weight is heavy as a rock or light as a feather, the terminal velocity of both is the same. Clutching onto both will diminish your capacity in every space of your life. It will interact and restrict every single dimension of your being. Letting it go is a relief; if you've held on too long, it can be completely bewildering because how you function, how you carry yourself is all connected to what you hold on to. Sometimes freedom feels overwhelming and foreign and sore. My shoulders hurt for 36 hours after carrying around that rock all morning.

My household has a new shorthand now, when the children argue and start to hold bitterness for each other, we look at one another and ask, "do you want to hold a rock all morning?"

Nobody wants to because everyone knows where it leads—a handicap, frustration, anger. They'd much rather watch things fall out an open window and sing Disney showtunes.